Ascend 128T Review: All You Need to Know Before Buying

The Ascend 128T is a kayak that rules the fishing market when it comes to hunting and fishing for anglers.

This is the Ascend 128T Review for all those fishing enthusiasts out there. A kayak is an armored vehicle that gives them dominance when hunting on waters. Thus, the name kayak accurately translates to the hunter’s boat.

All professional anglers know what an incredible edge having a robust and versatile kayak gives.

But for those who don’t know, what is a kayak? Well, a kayak is a small watercraft that needs a double-bladed paddle to propel on the water. Anglers use it for hunting and fishing. The kayak is famous for being a covert vehicle that can prey on its victims in their unawareness.

So, why would a kayak interest anyone, especially the Ascend 128T? Well, that’s what this post is about, and I hope to answer all your burning questions, so you know whether it will be a good fit for your money or not.

Without further ado, let us jump into the article and learn all there is to know about this kayak. Here’s what we will cover in this post.

Is The Ascend 128T Fishing Kayak Worth It?

First, let me tell you that an enhanced kayak will be much better in performance-cost efficiency, and a perfect alternative for a motorboat.

It costs less, it’s easier to transport in your F150 or even you Subaru, and anglers need not spend much on fuel, fees, insurance, and maintenance.

I highly recommend this vehicle for anyone who is looking for a cost-efficient alternative to a fishing boat. 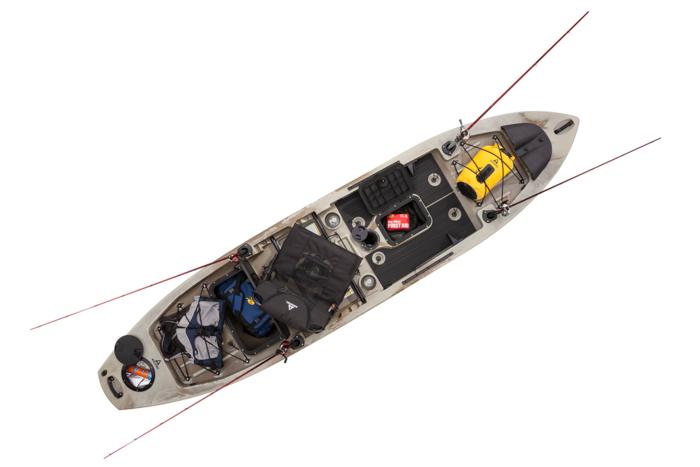 An average kayak would start from $500. The most basic features a kayak should have to provide the angler with a smooth experience on the water. However, the Ascend 128T is much more versatile than the average kayak.

It comes with several features that help the angler on the water. So, the added $200 is perfectly considerable, given the number of features and accessibility it provides.

Since this kayak has so many amazing features, the price is also proportional. But, after learning more about it, I’m positive that you’ll start saving for it right away.

The Ascend 128T kayak is a game-changer for anglers. So, it’s worth it for people who have the budget to afford this amazing watercraft.

Now, if you’re still interested in learning more about this kayak, then congratulations! You’ve made the right decision. Let’s move on this Ascend 128T Review to learn about the fascinating features. 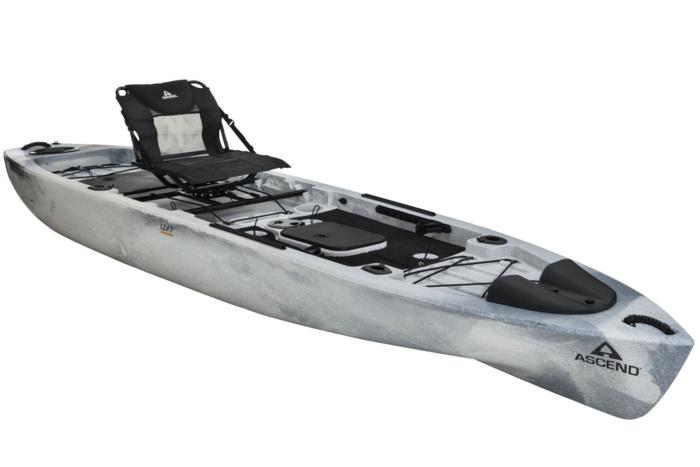 How Stable Is The Fishing Kayak? – Ascend 128T Review

One of the most important features of any kayak is stability. Without stability, any kayak is useless. It needs to keep the anglers in place while they fish. The Ascend 128T takes stability to the next level by enabling the angler to fish while standing or sitting and keeping them stable while paddling.

The Ascend 128T is a sit-on-top kayak that merges stand-up paddleboard characteristics to provide outstanding stability while standing, fishing, or paddling.

Ascend built this kayak for anglers to fish while standing, so they implemented the best no-slip grip on the kayak platform instead of generic plastic, which prevents the anglers from slipping when wet.

If that’s not enough, it also has a stand-up helper flexible rope, which you can use to stand up seamlessly and change your fishing position just like that!

Let’s continue this Ascend 128T review and see how hard is fishing. 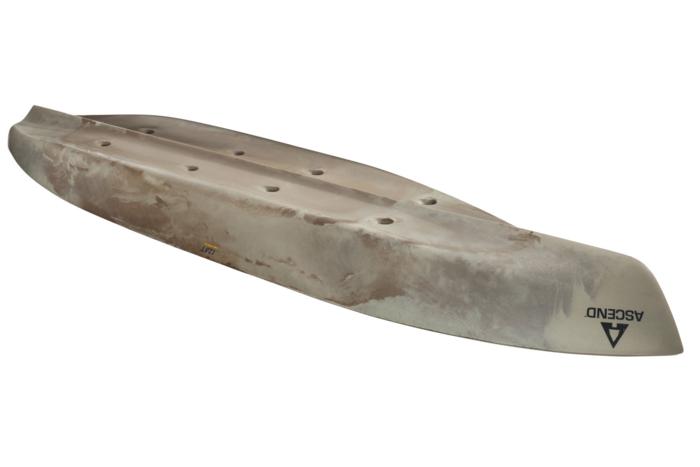 How Hard Is It To Fish?

As we’ve talked before, the Ascend 128T provides incredible stability. Combined with that, there are plenty of other features that make this kayak very convenient and makes it very easy for anglers to fish.

For instance, this fishing kayak comes with a built-in detachable swivel seating system that can rotate 360 degrees seamlessly. It allows the anglers to easily change their position while they fish or paddle. When adding to the user’s convenience, this kayak comes with a lot of features that make an angler’s life easy.

So, you can rest free knowing that this kayak won’t give you a hard time when you go out with it to fish. 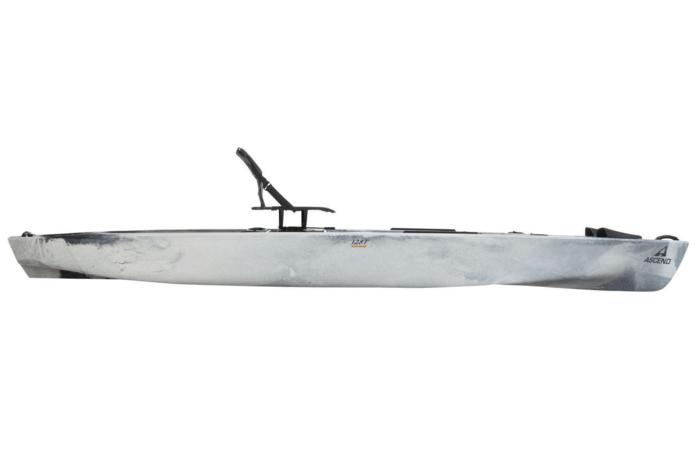 What Are The Features Of The Ascend 128T?

Now, this is the part that most enthusiastic and nerdy anglers look for in a review. So, I will explain the best as I can.

The Ascend 128T Sit-on-Top Kayak has an innovative design that comes with customization options, unlike any other kayaks. For instance, this kayak is rotomolded and has a custom-crafted tunnel hull with ample transom and flared bow sections. The bottom of this kayak is quite broad, and it’s curved, which makes it ideal for excellent stability. Also, this kayak has exceptional durability and tracking stability, which adds to the comfort of the angler.

This kayak has a built-in yak power system. For those of you who don’t know, a yak power system is a digital switching system that comes with an array of power outlets and power options. This feature is one of the key ones in the Ascend 128T fishing kayak. In other words, the yak power system brings harmony into the wiring.

A master controller controls the power outlets, and three power plugs make it easy to append and manage 12V powered electronics on your kayak. You can effortlessly connect your fish finder, GoPro camera, bait well pump, LED lights, charging cables, and any electronics you might use on the water. 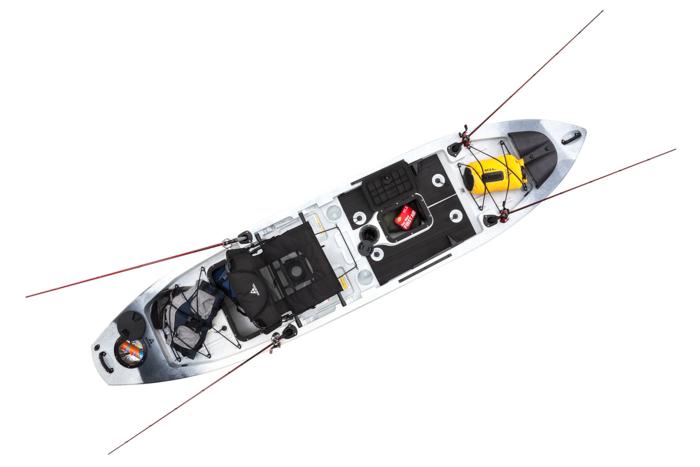 Accessibility and Ease of Use

It is remarkably durable and robust in structure. The makers optimized this kayak for performance and stability. This kayak is one of the most stable kayaks out there. With a built-in swivel system, it makes all the difference. Because this kayak has ropes located in the front and the back of the kayak, it’s easy to move it around regardless of its extra weight.

Getting in and out of the kayak is a breeze because it has such an easy swivel seating system. The non-slip rubber pads make it easy to get on and off the kayak without slipping or falling off. Also, the wide seating position makes it convenient for anyone to sit and relax. Lastly, the paddling system is smoother than the previous builds, so you will have to spend less energy trying to drive it.

The kayak comes with ample storage to store many of your belongings safely. It has a recessed bow and stern flush-deck bungee mounting system that provides limitless options for accessories. In addition, it also has midship and aft weathertight storage, and all storage systems are waterproof and sealed tightly, so you’ll hardly ever see any leaks.

Do You Want To Know The Latest Price? Click Here

A single kayak won’t always give you all the necessary tools you need. Sometimes, the underlying designs and structure and tool placement might not satisfy you. That’s why the Ascend 128T kayak has ample room for custom modifications.

The most important and significant modification you can make to your kayak is most probably the ability to attach a trolling motor. If you’re tired of paddling or don’t want to paddle, then the Ascend 128T has you covered with this modification.

You can find modifications for attaching a custom action camera, fish finder, custom rod holders, making extra storage, connecting custom battery boxes, or anything you like. So, this feature of the kayak makes it extremely versatile and powerful. 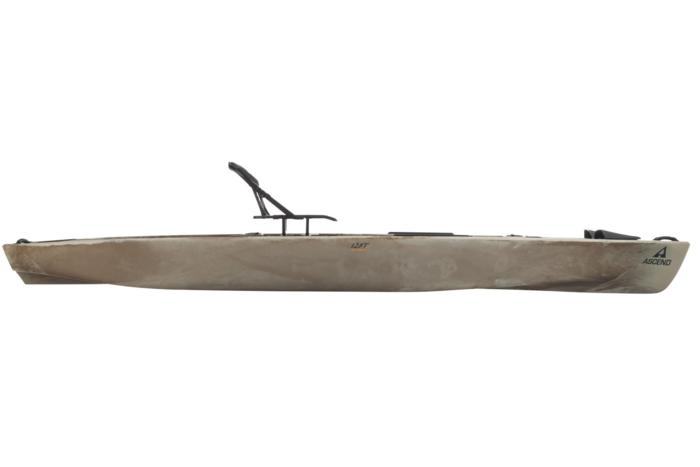 Apart from modifying your kayak structure and accessibility, this kayak lets you use many accessories of your choice. For instance, you can buy custom paddles, scupper plugs, custom seats, rubber pads, handles, screws, bolts, and more.

If you need anything that you think is missing from your kayak, you can go to Cabelas.com to look for accessories that you might need.

I created a list of the best selling accessories and some of the “you can’t miss” at the end of this post.

Now that we know about the features, modifications, and accessories, let’s see what makes this kayak great and what improvements can the makers add to this kayak.

So, should you get this, or should you not? I recommend this kayak because it will give you an astounding experience on the water. It’s super stable, so you won’t even feel an ounce of discomfort while standing and fishing. Compared to all the other kayaks, canoes, or boat and motor. This kayak is relatively cheap, considering all the features it provides.

But, on the downside, if you’re someone who doesn’t like labor-intensive work or if you’re physically not that capable, then it will be quite difficult for you to carry this kayak to places.

So, if you want a stable kayak with convenient features at an affordable price, then you should save up for this kayak. It will not disappoint you. So, I hope I was able to shed some light on this kayak and enrich you with all the information you need before buying your next big armored vehicle.